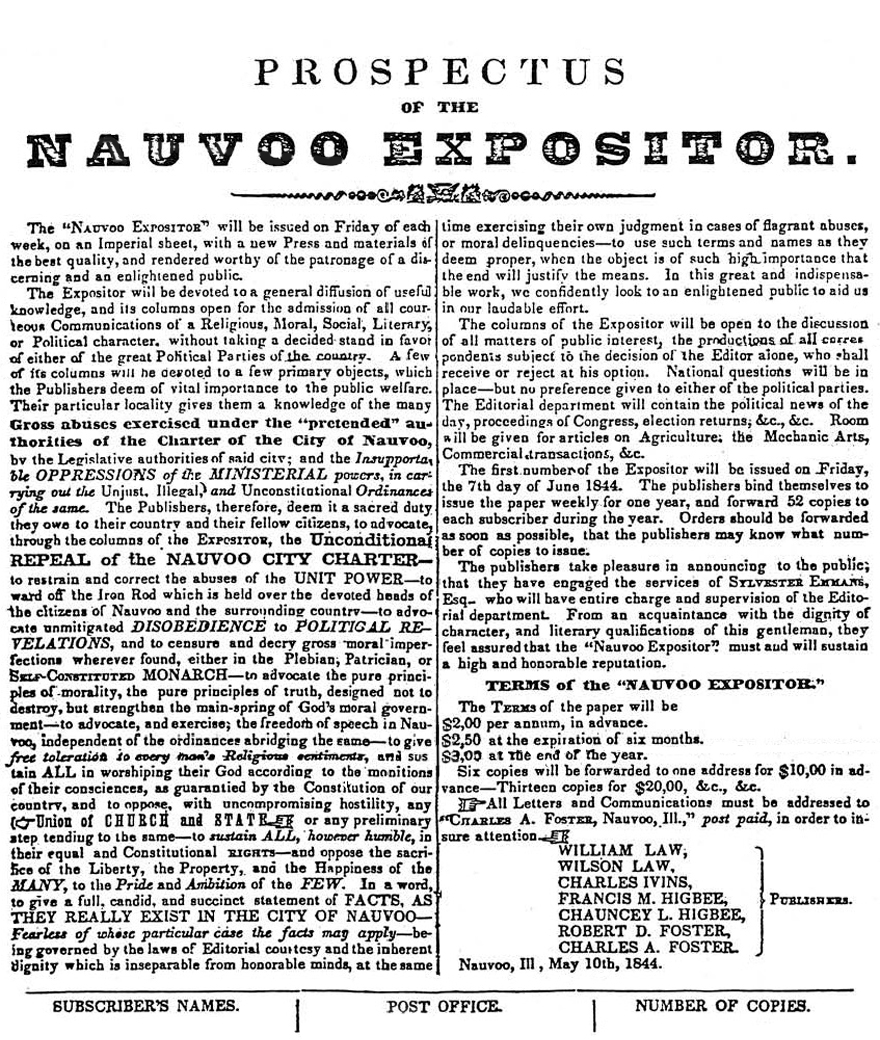 The “NAUVOO EXPOSITOR” which will be issued on Friday of each week, on an Imperial sheet, with a new Press, and materials of the best quality, and rendered worthy of the patronage of a discerning and an enlightened public.

The Expositor will be devoted to a general diffusion of useful knwledge, and its columns open for the admission of all courteous communications of a Religious, Moral, Social, Literary, or Political character, without taking a decided stand in favor of either of the great Political parties of the country. A part of its columns will be devoted to a few primart objects, which the Publishers deem of vital importance to the public welfare. Their particular locality gives them a knowledge of the many gross abuses exercised under the pretended authorities of the Nauvoo City Charter, by the legislative authorities of said city; and the insupportable OPPRESSIONS of the MINISTERIAL powers in carrying out the Unjust, Illegal, and Unconstitutional Ordinances of the same. The Publishers, therefore, deem it a sacred duty they owe to their country and their fellow citizens, to advocate, through the columns of the Expositor, the Unconditional REPEAL of the NAUVOO CITY CHARTER – to restrain and correct the abuses of the UNIT POWER – to ward off the Iron Rod which is held over the devoted heads of the citizens of Nauvoo and the surrounding country – to advocate unmitigated DISOBEDIENCE to POLITICAL REVELATIONS, and to censure and decry gross moral imperfections wherever found, either in the Plebian, Patrician, or Self-constituted MONARCH – to advocate the pure principles of morality, the pure principles of truth; designed not to destroy, but strengthen the main-spring of God”s moral government – to advocate, and exercise, the freedom of speech in Nauvoo, independent of the ordinances abridging the same – to give free toleration to every man”s Religious sentiments, and sustain ALL in worshiping God according to the monitions of their consciences, as guarantied by the Constitution of our country; and to oppose, with uncompromising hostility, any Union of CHURCH and STATE, or any preliminary step tending to the same – to sustain ALL, however humble, in their equal and Constitutional RIGHTS, and oppose the sacrifice of the Liberty, the Property, and the Happiness of the MANY to the pride and ambition of the FEW. In a word, to give a full, candid, and succinct statement of FACTS, AS THEY REALLY EXIST IN THE CITY OF NAUVOO – Fearless of whose particular case the facts may apply, being governed by the laws of Editorial courtesy, and the inherent dignity which is inseparable from honorable minds; at the same time exercising their own judgment in cases of flagrant abuses, or moral delinquencies – to use such terms and names as they deem proper, when the object is of such high importance that the end will justify the means. We confidently look to an enlightened public for aid in this great and indispensable effort.

The columns of the Expositor will be open to the discussion of all matters of public interest, the productions of all correspondents subject to the decision of the Editor alone, who shall receive or reject at his option. National questions will be in place – but no preference given to either of the political parties. The Editorial department will contain the political news of the day, proceedings of Congress, election returns, &c., &c. Room will be given for articles on Agriculture, the Mechanic Arts, Commercial transactions, &c.

The first number of the Expositor will be issued on Friday, the 7th day of June 1844. The publishers bind themselves to issue the paper weekly for one year, and forward 52 copies to each subscriber during the year. Orders should be forwarded as soon as possible, that the publishers may know what number of copies to issue.

The publishers take pleasure in announcing to the public, that they have engaged the services of SYLVESTER EMMANS, Esq. – who will have entire charge and supervision of the Editorial department. From an acquaintance with the dignity of character, and literary qualifications of this gentleman, they feel assured that the “Nauvoo Expositor” must and will sustain a high and honorable reputation.

Advertising and Job Work in all their varieties, done on short notice, and upon the most satisfactory terms.

All Letters and Communications must be addressed to “Charles A. Foster, Nauvoo, Illinois,” post paid, in order to insure attention.