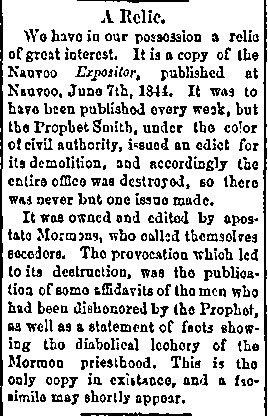 We have in our possession a relic of great interest. It is a copy of the Nauvoo Expositor, published at Nauvoo, June 7th, 1844. It was to have been published every week, but the Prophet Smith, under the color of civil authority, issued an edict for its demolition, and accordingly the entire office was destroyed, so there was never but one issue made.

It was owned and edited by apostate Mormons, who called themselves seceders. The provocation which led to its destruction, was the publication of some affidavits of the men who had been dishonored by the Prophet, as well as a statement of facts showing the diabolical lechery of the Mormon priesthood. This is the only copy in existence, and a facsimile may shortly appear (“A Relic,” Salt Lake Tribune, vol. IX, August 18, 1875, no. 105, p. 4).