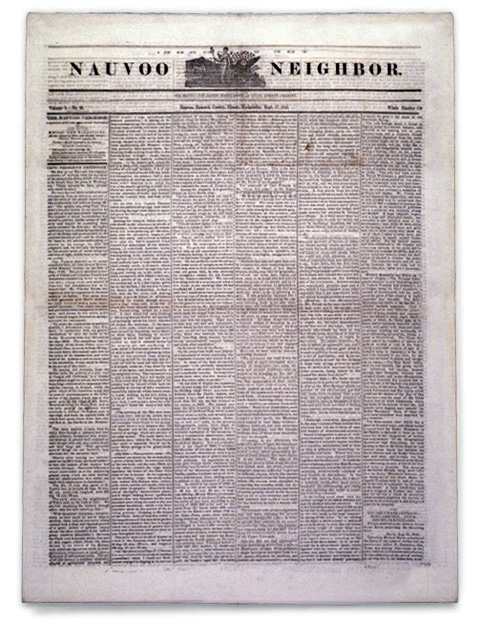 Throughout most of the history of Mormonism the church has followed the pattern of issuing from its headquarters two periodical publications, one which disseminates religious information such as reports of conferences, histories of the church, and the theological writings of church leaders, etc., with another paper oriented towards “news.” Nauvoo was no exception to this rule. Its religious organ, the Times and Seasons, began publication in April 1839 with the news counterpart The Wasp beginning in April 1842. The Wasp was initially edited by Joseph Smith”s younger brother William who unfortunately became embroiled in a war of rhetoric against the accusations of the anti-Mormon Warsaw Signal. After one year it was decided to make the church”s newspaper more conciliatory by changing the name and editorial posture. Thus in May 1843 the Nauvoo Neighbor was born.

The Neighbor ran for a total of 127 issues from May 3, 1843 to October 29, 1845. It was printed in a four page six column format that was twice the size of its predecessor The Wasp. Its purpose, in the words of editor John Taylor, was “[to] endeavor to cultivate a friendly feeling towards all, and not interfere with the rights of others, either politically or religiously” but “concerning politics we shall not be silent.”

The Neighbor printed a wide variety of information, from local and national “news” to poetry, fiction, legal notices, advertisements, and reports of actions taken by the Nauvoo City Council and editorials. It also reprinted articles from other newspapers and books relating to issues relevant to the Mormons. For example, during its final six months of publication the Neighbor published articles clearly targeted at those who anticipated a move to the West. Numerous articles also appeared relating to California, Oregon, and Texas, including excerpts from Lansford Hastings” Emigrants” guide to Oregon and California and the reports of the John C. Fremont expeditions. In its last few issues the Neighbor gave detailed reports of the numerous anti-Mormon depredations occurring in Hancock County and on October 22, 1845 (the next to last issue) it reprinted the announcement (See Whereas a council… , exhibit item #10 ) that the Mormons would leave Nauvoo the following spring.1

The Nauvoo Neighbor was a weekly newspaper published and edited by John Taylor in Nauvoo, Illinois, from May 3, 1843, through October 29, 1845. It replaced The Wasp (begun April 16, 1842, with William Smith as editor). Funded by subscriptions and advertising, the Neighbor regularly featured literature, science, religion, agriculture, manufacturing, commerce, and local, national, and international news. It reported actions of the state legislature, the Nauvoo City Council, and local courts.

As an advocate of truth, the Neighbor detailed conflicts involving the members of the Church, their neighbors, their enemies, and state and federal governments. It also carried correspondence between the Prophet Joseph Smith and Henry Clay (both U.S. presidential candidates) as well as the letters between Emma Smith and Governor Thomas Carlin concerning Joseph Smith”s harassment by Missouri officials. It detailed the Nauvoo Expositor case and the events of the assassinations of Joseph and Hyrum Smith in Carthage Jail, including other newspaper accounts and correspondence. The Nauvoo Neighbor is a valuable record of the events and attitudes in and around Nauvoo from 1843 to 1845.2